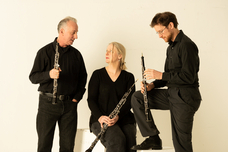 The Lonarc Trio play Viennese Trios, including Wenth’s Petite Serenade Concertante in F major, first performed in 1793 for the Benefit of Widow’s and Orphans where a young Beethoven was in the audience.

“The players led by the outstanding Joseph Sanders, have such familiarity with each other and the music that they are able to take risks, to seamlessly blend and to introduce new repertoire to eager ears.” Celia Craig ARAM Principal Oboe Adelaide Symphony Orchestra

Free to the public

If you are looking for a summer course to take you off to warmer climes then have a look at these two offered by AIMS in Spain, August 2019. 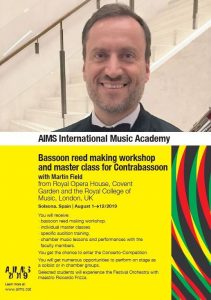 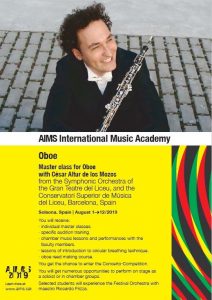 Oboists might be familiar with the abridged version of Silent Aria which appears on the ABRSM oboe syllabus, here is some background to how the full suite came to be written:

This suite for oboe and piano has recently been published  in November 2018, by Novello/Musicsales classical.  There are four movements to this piece and these include:

The Suite is written by Leicestershire Composer, Philip Herbert (pictured below). It was commissioned by Serendipity UK for the 2014 Let’s Dance International Festival, where there was an opportunity to collaborate with the acclaimed choreographer, Henri Oguike along with  dancers.

The Suite ‘Silent Aria’ carries this title, as the suite was inspired by the work of award winning black choreographers who worked during the 1970s, 80s and 90s; but more recently their work has become forgotten. Each movement is imbued with an eclectic array of musical influences. In the first movement, there are some beautifully sustained melodic lines for the oboe, suspended over a syncopated 3 note motif that is coupled with arpeggio figures in the piano accompaniment. There are also sections of this movement, where there are lush chords progressions that you might find in a soul ballad. The second movement is based on a soulful theme and variations which carries the influence of a spiritual/blues, pentatonic tonalities: with opportunity for the oboist and the pianist to swing across the beat. The third movement, is ternary in form and there is a dark haunting main theme in C sharp  minor, but the mood lightens in the middle section that is in C major, before returning to the opening theme in C sharp minor. The fourth movement is rhythmic where the musical influences touch on calypso and latin dance rhythms. There is plenty of room in this movement to enjoy the joyous rhythmic exchange between the oboe and piano parts.

You can hear an excerpt of the suite here http://www.philipherbert.org/sound/  in it’s abridged version, as found on the ABRSM syllabus.

Khemi Shabazz (pictured) is a versatile oboist and a keen explorer of a range of musical styles from classical music, world music through to electronica. She is currently planning a recital for oboe and piano  in Leeds, to feature this work. Watch this space.

If you join as a member you’ll have access to Spring 2019 – the latest edition – in print!

We are supporting the BIG Double Reed Day at Guildhall School of Music & Drama, in London on Sunday 17th February. If you spot one of our representatives there do say hello!  Visit their website to apply – but be quick – the deadline for applications is midnight on Friday 1st February (You can still apply after this date, but there will be an extra admin fee) https://www.bigdoublereed.com/about.php