We are very sorry to hear news of the death of Andrew ‘Andy’ Hunter on Wednesday 7th July after a short illness.

Andy was a founder member of the Scottish Chamber Orchestra and during the 2020 lockdown was persuaded to write his memoirs, which have been published as a book, Travels with a Bassoon, launched as a BDRS Short Film in December 2020.

Andy’s son has written an obituary for his father, reproduced below.

“Well-known in Scottish orchestral music circles, Andrew Hunter passed away on the morning of Wednesday 7th July after a short illness. Commonly known as Andy, he began his working life as an apprentice engineer; however, having started music lessons at the age of 14, the piano became his main interest and he abandoned his apprenticeship to pursue this.

“In his early 20s he secured his LRAM and ARCM diplomas with Julia Ommer, and under her auspices became a piano teacher, ultimately taking the Chapter VI Music course at Jordanhill College as an escape route from an occupation he found inconducive. During his teaching practice he attended Glasgow Teachers’ Orchestra rehearsals, conducted by Donald B Miller, a principal teacher, and who taught in one of Andy’s schools.

“After some time playing piano-conductor and harp parts in the orchestra, Mr Miller invited Andy to take up an orchestral instrument. He expressed an interest in horn or oboe but the only wind instrument available for loan was a bassoon. He arranged lessons with Lionel Goring, principal of the BBC Scottish Orchestra, who made the condition that the obsolete instrument from the Teachers’ Orchestra be replaced with a modern one. Within two years Andy was a familiar figure, deputising in the then non- royal SNO, and also called upon as an extra at the BBC.

“In the early 70s he played in an orchestra formed to supplement the SNO for which, in the early days of Scottish Opera (as the sole orchestra of the Company), and with the increasing number of productions, another occupant in the pit was needed. The SNO freelance wind players were engaged and Leonard Friedman led what was basically his own Edinburgh-based Scottish Baroque String Orchestra plus wind, brass, and percussion. This eventually morphed into the Scottish Chamber Orchestra, initially a freelance opera orchestra which gave concerts when the SNO was in the pit. Andy was, therefore, a founder member of the SCO.

“In 1963 he married Aileen Way, who had been a horn player with the SNO, and as family obligations increased, took an ARCM on bassoon with a view to becoming an instrumental teacher in schools. This necessitated practical knowledge of flute, oboe, and clarinet, which with the help of former colleagues he soon gained. He was highly successful in his teaching from the late 60s in Bellahouston and Shawlands Academies (amongst others), and Jordanhill School, whence he retired.

“Andy’s other interests included painting and model-making. He is survived by two sons.” 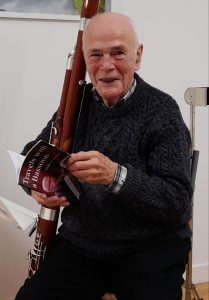