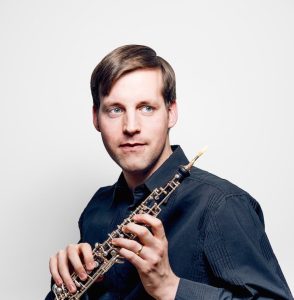 “I started learning the oboe, aged 7, when one day I heard it on the radio and fell in love with the sound of the instrument. I joined BDRS while at primary school and enjoyed the many annual conventions and copies of DRN I had access to over the years. At school I also learnt to play the piano and violin but oboe was always the instrument that felt like home. I remember hearing the second movement of the Poulenc Trio for Oboe, Bassoon and Piano having just started at secondary school and wanting to play that more than anything in the world.

“Since leaving university and then music college, I love the variety in life that one gets as a musician. Being able to play and teach the oboe is something I enjoy a great deal. My primary passion as a musician is to make it easier for people to pick up instruments like the oboe and bassoon (often referred to as endangered species). I also think it is really important for us to continue building new repertoire. We are extremely lucky to live in an age where the composers alive today offer so many incredibly distinct voices and take the instruments we play in such beautiful and interesting directions.

“I have made a site that tries to make it easier to find out about the oboe, as well as a website that promotes new music for the instrument.”

“I came late to the double-reed family, having only taken up the bassoon in my late 40s. As a child I learnt the violin and piano, but never felt secure with either of these, and eventually discovered a passion for the recorder and for music of the baroque period.

“I studied music at Cambridge where I seized the opportunity to perform with some talented fellow students. Needing a steady income I then joined the civil service, and it was only when my children started to grow up that my thoughts turned to a different sound and a wider repertoire. It had to be another wind instrument; I had always liked the sound of the bassoon, and the notion of playing a less common instrument — which also offered a chance to experience orchestral texture from the inside — was appealing. Learning a new and rather difficult instrument, with limited time in mid-life to practise, has been a challenge and I owe a considerable debt to two patient and supportive teachers! I now play mostly chamber music in various combinations, especially French music of the last century.

“Along the way I have benefitted from attending Society events and enjoyed reading Double Reed News. As incoming Secretary I am keen to help to maintain and develop the Society as a strong and relevant body with something to offer to all double-reed players. ”

“Writing this I realise that the bassoon has been an important part of my life for over 50 years. I

began with lessons at secondary school and went on to study at music college and while music did not become my career (I had what musicians’ sometimes I think wrongly refer to as “a proper job”), it has provided me with some of the most memorable and pleasurable experiences and friendships of my life. I was fortunate from early days with the bassoon to have opportunities to play in orchestras and chamber groups, to perform in innumerable concerts in wonderful, sometimes famous, and occasionally bizarre venues. I’ve also been privileged on a number of occasions to perform concertos and concertante works. Throughout I’ve been fortunate to have fascinating and inspiring teachers and colleagues.

“I joined BDRS at its inception and when I stopped working joined the committee. As newly-elected Treasurer I hope to help the society develop and thrive so it can continue to help, encourage, link, and acclaim oboists and bassoonists in the UK and with the wider double reed community.”

“I came to the oboe having tried, at various stages, the piano, violin, tuba, tenor horn, French horn, and finally guitar. My dream about the oboe, as a teenager, was inspired by a Trinity College oboe student coming to play wonderfully in our local orchestra who always wore a suit, which struck me as odd even then!

“I have been with the oboe for about thirty years now and play in a North London orchestra, as well as chamber groups with friends, and am a member of the Oxford and Cambridge Music Club, taking the ATCL Trinity Diploma a few years ago. I have recently started to ‘translate’ pieces for wind groups, sometimes including piano, and quite enjoy the resulting struggle with Sibelius!

“I was secretary and chair of a wind orchestra for many years and feel confident that this experience can serve me well with the BDRS. I am very interested in understanding members’ wishes for the future of our Society and in looking at ways to expand our membership.  Commissioning articles to appear in DRN, particularly for the amateur oboist, is also one of my aims.”

“When editing the BDRS magazine I often conjure the wry smile on the face of my English teacher, expending much red ink on my latest essay – he was only too aware that most of my time was dedicated to one or other of the many aspects of music-making that absorbed me then, as they do now. He would doubtless have entertained little idea that I might one day be wielding a red pen of my own.

“The Royal Academy of Music was curiously short of bassoon players the year they let me in, ensuring this late-starter had to catch up extremely fast. But already I had been bitten by the conducting bug. I now see another wry face, that of my piano professor, Alan Richardson; nevertheless his wife, Janet Craxton, proved a great help as co-conspirator when, some years later, I formed the New Mozart Orchestra, and she became its Principal Oboe.

“Although most of my career has been driven by orchestral conducting — including the LSO and LPO — promoting music education has always featured deeply, whether as lecturer, examiner, teacher, or youth orchestra conductor.

“I have held the editorship of DRN continuously since 1996 and produced over 80 editions.”

“I began learning the bassoon aged twelve, being taught at school in Plymouth by visiting Royal Marine bassoonists. I soon joined Plymouth Youth Orchestra, through which I became a pupil of Kerry Camden at Exeter University Music Department, up until I left school. I then read for a BA in Mathematics and Music, followed by an MSc in Operational Research at the University of Birmingham. While an undergraduate I also studied at the Birmingham School of Music with David Robinson and Andrew Barnell.

“Since 1984 I have lived in the Portsmouth area where, for several years, I worked as a software and systems engineer on naval computer systems, initally for Ferranti Computer Systems Limited and finally for BAE Systems. From 1993 to 1999 I resumed my bassoon studies by becoming a part-time student at the Guildhall School of Music & Drama with Ian Cuthill, alongside my full-time job.

“Since leaving the defence industry I have gained an LRSM in bassoon performance and am currently a self-employed bassoon- and contra-player and private teacher. I play regularly with the Havant Symphony and Chamber Orchestras, the City of Southampton Orchestra, and with professional chamber orchestra Southern Pro Musica. I also freelance for other orchestras and societies across the south.”

“I’ve been a member of the BDRS for nearly twenty years. I read Music at Selwyn College, Cambridge, and went on to a Masters in Conducting, before undertaking a degree in Theology & Religious Studies to enable me to pursue a PhD in Music and Theology. My research has now strayed into evolutionary biology and cognitive psychology; I teach and lecture at the University of Cambridge in these areas as well as the practical musicianship side of things, and am occasionally persuaded to teach and examine Jazz and improvisation at Cambridge and the GSMD. Outside of academia I have a major role as CEO & Artistic Director of the National Youth Wind Orchestra of Great Britain, alongside my work as a conductor and organist in the UK and abroad, as well as bassoon-playing (of course!). When not making music of one form or another I enjoy boxing, swimming, and long-distance cycling, and take great delight in learning new languages.”

“Born and raised in London, my musical journey began at a young age, picking up the violin at four years old. I taught myself music theory, piano, guitar, recorder, alto saxophone and, by the time I was 16, was adept on eight instruments, including cor anglais, recorder (descant, treble, and tenor), singing, and the instrument that would define my journey: the oboe.

“I have performed professionally as a freelance musician across the UK and Europe, encompassing musicals, operas, marching bands, solo and orchestral works. Currently, I am a member of Chineke! Orchestra, and also serve as a woodwind mentor to Chineke! Junior orchestra. Alongside this, I balance my musical career with a role in Finance at the Royal Academy of Music (RAM). I also teach in various schools, as well as offering private tuition, and a private reed-making service.

“Having trained as a yoga instructor specialising in the face muscles, my teaching incorporates exercises and techniques which prevent pain and injury.

“Striving for racial equality within the classical music industry, I have spoken on numerous platforms to spark unity, which recently included the International Double Reed Society Symposium 2020. I also sit as a committee member for Freelance Musicians for Musicians Union, and RAM’s Equality, Diversity & Inclusion, and Access & Participation committees, with the ultimate aim of ensuring inclusivity for musicians from all ethnic backgrounds.

“In my spare time, I enjoy going to the gym, reading, yoga, hiking, swimming, boxing, and painting.”